Dear Athlone, when did we forget that the sea is also our home? 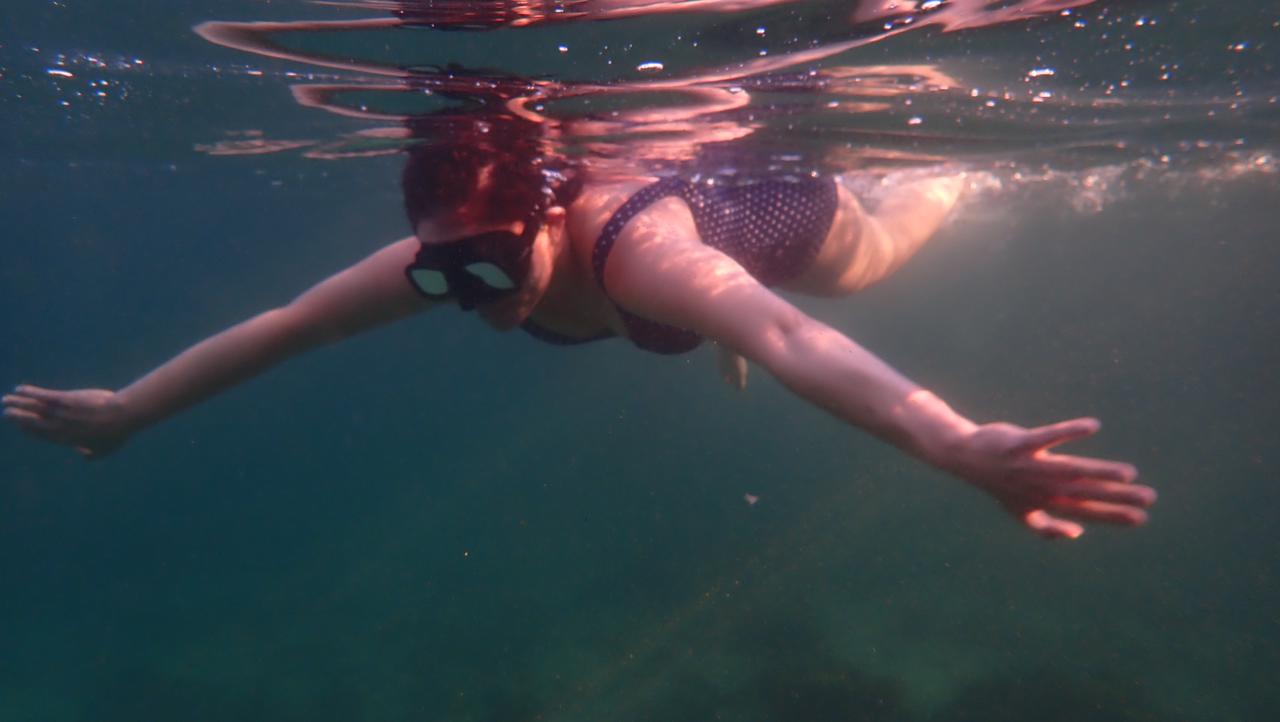 Long long ago, all of this land was under water. The Khoe name for Table Mountain is Hoerikwaggo (Huri ǂoaxa): mountain rising out of the sea. When you stand on top of the mountain, you will find sea sand and bits of crushed sea shells among the rocks.

Mussels, kreef kerrie, braaied snoek, kabeljou. Early morning train rides to Kalk Bay. The fish horn blaring as the truck moves through the street. Familiar sounds and smells. And still, our relationship to the sea is much deeper and older than this.

Our suburb sits in the geographical centre of Cape Town. If you look at a map, you will see that Athlone sits in the physical centre of this city. A river runs through Hazendal. But we are at least a 20-minute drive from the nearest beach.

Many of us have stories of summer’s spent on the beach. Umbrellas, and blankets, picnic tables and chairs, cooler boxes and plastic buckets packed into car boots, onto trains and taxis, to spend a day on the sand, splashing in the water, eating ‘n hele Sunday lunch out of Mommy’s cooler bag.

I was blessed enough to have parents who took us to the beach from a young age, and, insisted we learnt how to swim. My mother was a swimmer, but my father never learnt. He loves the water though. And his side of the family, are sea people.

The call to the sea, was passed down to my father’s brother John Peter, who passed away on Easter Sunday. Growing up, Daddy used to tell us the story of how Uncle Peter wanted to go to sea as a teen, but Grandma said no. “The day your uncle got married, he said to Grandma, ‘Am I my own man, now?’ She said, Yes. He packed his bags and went to sea.”

My uncle fished his entire life. While he carried the surname Stuart, the blood of Grandma’s people ran through his veins and bones. The sea was his home.

Today is World Ocean’s Day. And for the first time this year, I feel called to reflect on my own relationship to the sea, to the oceans. Because in the past year, it has changed remarkably, from one of distant connection to a deep abiding love.

I moved to Muizenberg in 2016, when my friend Carly invited me to live with her after I came back from London. Carly’s heart is the sea. She swims every day, even in winter; her happiest days, are when she swims twice in one day. When I moved in, I hadn’t swum in the sea for over 5 years. I had been to the beach, but feeling self-conscious and uncomfortable in my own body meant I could not remember when last I wore a swimming costume. Also, curly hair and swimming, has many traums childhood memories.

But living with Carly, and living so close to the ocean changed that. Her love for the sea was infectious. Slowly, I became used to the water again, and the more I walked and swam, the more comfortable I became in my own skin, until my self-consciousness was slowly washed away by the tide, over time. Sunrise swims; Full Moon night swims; swims in the middle of a work day; sunrise hikes up Muizenberg mountain followed by a jump in the sea.

I was happy in the water, and felt at home in it, and yet, there was still a line for me. A number of people in Muizenberg went snorkelling and freediving. Carly mentioned wanting to do it too. And this voice in my head, said “No, daai is wit mense se goed. Don’t keep you white.” We all know this statement. We have heard it in some form or variation throughout our lives.

Then I visited Diani Beach, Kenya in January 2020. And my host taught me to snorkel. Something about seeing black and brown people snorkelling and diving, made me feel like I could do this. I could not believe the world that existed under the surface of the water. We were snorkelling in and around a reef on the Indian Ocean, and the tropical sea life was exquisite.

When I got back to Cape Town, I still felt hesitant... the snorkelling and freediving community seemed very white. I feel weary of all-white spaces in Cape Town, and tend to avoid them, because I find them emotionally tiring and spiritually draining. So much of my work is about re-writing historical and ancestral narratives. The thought of spending time with people who potentially have/show no awareness of their own ancestral relationships to the land, is tiring. And I have had enough experiences of this to know better.

Then I met Aaniyah Omardien, my friend Yumna’s older sister. Aaniyah is a marine biologist, environmentalist and founding director of The Beach Co-Op – an organisation that works to rebuild the relationships between communities and the ocean, through beach clean-ups, and restorations of our water sites. Aaniyah took me snorkelling at St James Tidal Pool, and just the fact that it was her taking me into the water, somehow gave me permission and made me feel: “Yes, I am also allowed to do this. This is also for us.”

After that first meeting, it still felt like something outside of my reach. In February this year, I decided to do 100 Days of Sunrise. Sunrise is my favourite time of the day. I love the silence and stillness of the dark, before first light, while the world still sleeps. Carly and I did it together. We started out walking to St James each morning, until about two weeks in, we decided to head to a small secluded beach in Simon’s Town. We swam every morning, even as the temperature changed and the water grew colder. Carly snorkelled. She found an octopus wherever she went and would just float on the surface of the water for ages, watching it. I didn’t have snorkel gear, so I decided to take my swimming goggles.

One Saturday morning, I swam in the sea with my swimming goggles and saw silver fish swimming around a rock. I was so excited, I couldn’t believe it. I swam further in and then I spotted my first ever octopus. It was camouflaged as a rock, but I saw something move so I stopped. And there it was, a small octopus, chilling on a rock. Visibility with swimming goggles is limited under water, but it still works. I watched the octopus for a while, and then went for a swim through the kelp to look at starfish.

When I got out of the water that morning, I wanted to cry. Because for the first time, I felt at home in the sea. I felt like I was also allowed to be there. Two things gave me the courage to step in and go under water. The first is the privilege of living close enough to the sea to swim at sunrise every morning and become comfortable with it. The second was, following a community of brown/creole/mixed/coloured women on instagram share their unapologetic love for the ocean, snorkeling and diving. Aaniyah, along with Joanne Peers and Traci Kwaai. Something about seeing their deep love, unabashed joy, and unapologetic way of taking up space on the shore and under water, made me see that this could be for me too.

Here’s the thing: I’m one of those children whose parents sweated and sacrificed to send them to a “good school” back in the 90s. I grew up exposed to all religions, colours, races, classes of people. In my working career, that continued as a journalist and then expanded even more as a poet, and as I travelled. And yet despite this access, these unconscious beliefs still lived in me. “Daai is wit mense se goed.” “Daai issie vir ons nie.” And that is what made me cry: for the first time, I was seeing how the oppressor didn't need to keep oppressing me anymore, because I was oppressing myself... I had internalised these beliefs and was acting them out in my own life. That cut deep.

Until that morning when I spotted the octopus, I didn’t realise that I had been the one holding myself back. That no one was banning me from the sea. But rather, that the apartheid ban still lived in my psyche. This is why I wanted to cry. Because the hurt runs deep, and it is very rarely directly taught. It’s taught through behaviours and the beliefs we inherit and learn by observing the people around us. It took seeing people like me, claiming the ocean as their own, for me to start believing that I could too. The word “permission” comes to mind. I am hoping this teaches me that I no longer need permission to explore other parts of life that call me.

Dear Athlone, on this World Oceans Day, may we remember that the sea is also our home. Our ancestors have fished and foraged along these shores for thousands of years. Our ancestors were brought here, arrived here, taken in here, at this coast for hundreds of years. We are who we are, because of this ocean we live alongside. It’s pathways and passages; it’s winds and tides. Our ancestors built these harbours and mountain roads; these tidal pools and walkways.

There are a host of people doing inspired and restorative work for our oceans: environmental conservation through social justice, re-building community access, citizen science and community ownership. I’ve listed them below. Please go look up their work. May it help us all remember, the oceans from which we are born.